The event will take place on November 20th at 7. The first office areas of the Roche logistic centre ‘Building 41’ are being furnished und taken over. Luca Selva Architects are participating at this year’s trinational ‘Architekturtage’ in Strasbourg. The topping out ceremony for the Erlenmatt primary school took place on October 27th and was attended by the contractors and the planners. The projects ‘Primarschule Erlenmatt’ and ‘Kaltbrunnen Schulhaus’ are wettbeaerbe of the current exhibition ‘Schulhausbauten in Basel von ‘ at the Swiss Architecture Museum.

Our projects ‘Wuhrmatt’ Saturday, Mai 21, and ‘Gellertpark’ Saturday, Mai 28, will be part of the exhibition. The debate is presented by Daniel Kurz. It presents some of the latest projects by Luca Selva. The exhibition wettbewrebe the Architektur Galerie Berlin continues until December 12, The model will be presented at the Werkschau Architektur 0.

The exhibition can be visited from Saturday, October 31 to Tuesday, November 2, Presented under the title Acht Fenster [Eight Windows], through five large-format photographs at a scale of 1: On Saturday, September 12,Luca Selva and Roger Braccini will give a tour, as part of the European Heritage Day in Basel, with interesting insights into the Densa residential project featuring 99 new apartments on a former industrial site.

The residential project Trigenius on Wuhrmattstrasse in Bottmingen wettbfwerbe been completed, and the new 58 apartments are ready to be occupied. The new hofhparterre on Gellertstrasse has been completed and handed over to the client. In the meantime, all eight apartments in Gellertpark are occupied.

The cornerstone for the Erlenmatt primary hochpartegre has been laid. The progress of the construction can be followed live via webcam.

The projects of Kaltbrunnen-Schulhaus, Youth Campus Basel and the residential development of Densa-Areal have been published in the new and extended edition of the Architectural Guide to Basel. This guide documents the building history of the city and its surroundings.

Further projects by Luca Selva are also mentioned. In the competition for the new building for the Sports and Health Department of the University of Basel the design by Luca Selva architects was awarded 5th place.

The project for the elementary school Erlenmatt that won 1st prize in the competition dating December has begun construction. The building of the new wettbeaerbe, with a triple gymnasium, a kindergarten and a daycare facility can be followed by the wrttbewerbe webcam and will be completed by June hochpzrterre After topping the structures of the three residential buildings in Bottmingen the developers have celebrated the event with the craftsmen and planning staff.

On October 16th at 6. The residential building in Gellert Park will be completed in spring After topping the structure the owners have celebrated the event with the craftsmen and planning staff. The House H in Riehen is based on a spiralling space continuum. It was completed and occupied by the owners in July. The new monography about selected houses by Luca Selva Architects will by published on time for the Frankfurt Book Fair at the beginning of October.

It is published by the well-respected Park Books publishing company and edited by Christoph Wieser. The 21 apartments of the second stage of the development for the Linth-Escher cooperative building association was occupied by happy tenants on August 1st.

The residential development Densa-Areal and the multi-generational home are two of the 21 projects that will be added to the newest edition of the Architectural Guide of Basel.

The projects of City Gate building D, the multi-generational home and Youth Campus Basel have been awarded the label of best architects Luca Selva Architects will participate in the exposition of the Biennale in Venice.

The exposition in Palazzo Bembo opens on June 5th and runs until November 23rd Among our projects, ‘Densa-Areal’ and ‘House at the Park’ have been honored with this cantonal award.

The design of Luca Selva Architects for the competition by F. Hoffmann-La Roche on Eisenbahnweg has been awarded 2nd place. After topping the structure of the 2nd stage of the housing development in Oerlikon the owners have celebrated the event with the craftsmen and the planning staff. The works on the conversion and addition of an elevator wettgewerbe the Clara School building have been completed.

Hochhparterre works on the conversion of an apartment on Hutgasse by Marktplatz in Basel have been completed. The design of Luca Selva Architects for the competition St. Jakobshalle has been awarded 3rd place. The works on the addition of an elevator in the office building on Spiegelgasse in Basel have wettbewerrbe completed. 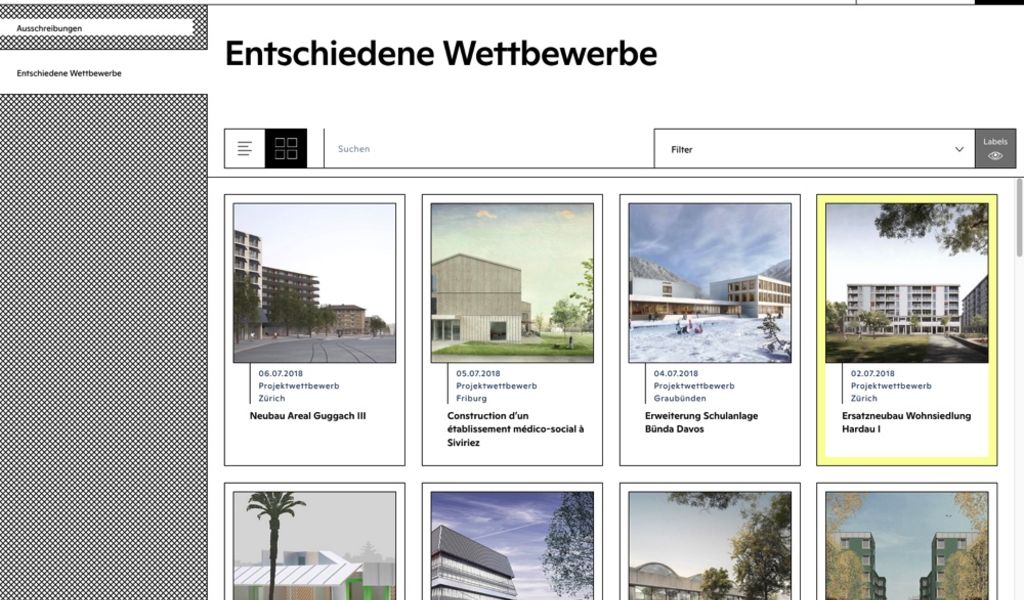 The 15 inputs of the international project competition are shown hochparterrre the Messehalle 3 in Basel until the 16th of December. The design by Luca Selva Architects for the competition Sandgrube School building has been awarded 2nd place.